My wife and I were able to get away for a few days just before our anniversary. We spent several days in Savannah, Georgia. Having been to Savannah in June let me tell you March is much better. The heat in Juene is just stiffling. Just be sure not to try and go on St. Patricks Day. This is a huge event there and hotel prices are through the roof not to mention the crowds. We were there the days following and it was not bad at all.

Our first day there had highs and lows. Our first stop once arriving on Thursday was Laurel Grove Cemetery. Laurel Grove is the final resting place of notables such as Francis Bartow, General Lafayette McLaws, Juliette Gordon Low (Girl Scouts), Moxley Sorrel, and James Pierpoint. Pierpoint is best known for having written Jingle Bells. There is also an area devoted to the brave men who fought at Gettysburg. In all over 600 known Confederate soldiers are buried in Laurel Grove. This was a nice cemetery to walk during the day. I would probably suggest being aware of your surroundings and not be there near dark. Like many older cemeteries it is not in the best part of town and no matter how interesting sometimes personal safety is the best option.

From there we made the drive to Bonaventure Cemetery. Bonaventure is probably best known from Midnight in the Garden of Good and Evil.  Here we saw the final resting places of notables such as General Robert H. Anderson, Confederate Surgeon Brodie Herndon, General Henry R. Jackson, Josiah Tattnall III, and many others. This is a large cemetery that you could probably spend days walking through. Also located here are the remains of songwriter Johnny Mercer, the ashes of 344 Holocaust victims, a section for Spanish-American War veterans and more. Well worth the visit if you are in town. Be sure to stop at the front office and pick up a map!

From here we headed back into the historic district and stopped by the Visitor's Center. We picked up some brochures and then headed to check in at our hotel. We decided to stay at the Double Tree in the historic district. As you can see we had a really nice room. Just a word of advice. Parking is at a premium in Savannah and hotels in the historic district pretty much all charge for parking. It is best to ask if there are any kinds of deals available. Parking was normally $18 per day. We managed to get a deal that provided parking and breakfast for both of us for $25 per day. For only $7 more we each got a huge buffet breakfast onsite and we were able to skip having a full lunch. We just got a quick snack each afternoon saving us much more than the original cost.
Before arriving we had checked at Restaurant.com to see if there were any good gift certificates available. We chose Moon River Brewing Co. It was close to our hotel and it didn't look too bad. We had seen it while in town last year but hadn't stopped in. After eating there I would highly recommend passing on this bar that just happens to have food available. I ordered the chicken and sausage creole. Not at all what I expected. First off if you are going to put mushrooms in a dish ADVERTISE IT ON THE MENU! I have found that online it says this but not on the menu you are given in person. Second, it just didn't taste that good. My wife ordered a steak that was WAY overdone. After having waited nearly an hour for our food it was quite a disappointment. Bad cooking, bad menu descriptions, and just not very good food. This could have and should have been a much better experience.   BUT for every bad there is always a better side. After "dinner" we walked over to Savannah Smiles Piano Bar. We had a great time listening to the dueling pianos. At one point one of the singers was belting out Waylon Jennings/Willie Nelson's "Mamma's Don't Let Your Babies Grow Up to Be Cowboys". He really did sound like both...in an exaggerated way of course. Between the great entertainment on stage and watching those who had had just a few too many to drink it made for a great end of evening. Be sure to bag your clothes or get them laundered once you leave. Cigarette smoking is allowed inside and we reaked of it afterwards.

After breakfast on Friday we headed out on foot towards Forsyth Park. This is a large park with a playground, beautiful fountain, Confederate memorial, and of course a Starbucks located inside the Visitor's Center area. Can't be without your mocha-triple-caramel-whatchamcoffee while watching the kids. This was a great place to spend the morning. There's pleny of benches and room to run with your dogs or your kids. 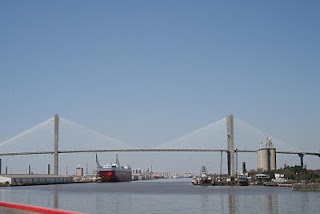 From Forsyth Park we headed back through town. Next on our agenda was a riverboat cruise. This cruise on the Savannah River was just over an hour. It was pretty interesting but I would have preferred to head toward the ocean and Tybee island rather than further inland. I probably wouldn't do it again but for a one time thing it was pretty neat. They also offer dinner cruises and murder mystery cruises. These might be fun to take as well. Prices are fairly reasonable for the regular cruise (ask for the AAA discount if you are a member) but they go up considerably for any of the package deals. The huge bridge seen in the distance does not do justice to just how large it is especially when you go under it. The height allows all but the largest of cargo ships to access docks upriver. If you were to drive over the bridge you would soon arrive in South Carolina.
After docking we did a little bit of walking along the shops located next to the river. There are plenty of stores, restaurants, and bars to keep you busy here. We then headed back to the room for a short break before dinner. Dinner on Friday was at Churchill's. I had the fish and chips and Chris had shepherd's pie. We were both pleased with the meals. Overall good food and atmosphere. Be sure to pick up one of their fliers at the visitor's center. It has a 10% off coupon attached. After dinner we took a stroll through part of the historic district and ended up sitting in the City Market area. There was a band playing cover songs and we just sat, listened, people watched and had a good evening.

Saturday was a bit of a late start. After breakfast we headed out to explore some of the many squares in town. When we would come to an interesting one we would just sit and people watch. Savannah seems to have a bit of a homeless or unemployment problem and many of these people can be found in the squares. One was giving a concert on his flute playing beginning versions of songs such as Take Me Out to the Ball Game. You just never know what you'll see or hear. We eventually made our way towards our goal which was the Georgia Historical Society. Due to funding cuts they have reduced hours and didn't open until noon. Unfortunately there was not really a lot to see here but there are plenty of research materials should you need them. If nothing else it's worth a walk by just for the impressive building.
Our next stop was V & J Duncan Antique Maps, Prints & Books.  What a treasure this place is! Drawer after drawer of antique prints and maps divided by subject. Case after case of books. Do you collect postcards? Don't miss the drawers full nicely divided by category. This store is a paper collectors dream. I picked up a nice woodcut print of the Confederate Cabinet while there and some postcards for my dad's collection. Make sure to say hello to Sally and Emma the shop dogs while there.
It was now time to wander back towards the river and the hotel. We stopped in several "antique" shops just to see what was there. Antiques such as "confederate" money dated well after the war, a nazi coat that was so obviously wrong somebody had written "fake" on the price tag (it could be yours for $500), and display after dispaly of items that look like they came from grandma's house. Not antiques or even really collectible just kind of old and dusty. I'm sure there were some finds somewhere in those shops but I'm not sure where. We then went back to the hotel for a brief rest before going to dinner. Dinner on Saturday was at Ruth's Chris Steak House. Expensive yes, delicious yes, great way to wrap up an anniversary trip, yes! Currently they are running a three course special for around $40 per person before 6:30. Quite a bargain and the food was excellent. Top notch service as well. When we finished it was still fairly early so we headed back toward City Market to see what was happening. No band that night but we grabbed a table and just sat and watched. Chris went and talked to the owner of a white, deaf, great dane. Beautiful dog and very calm despite all the people around. I noticed many stop to take photos of or with the dog. The owners were very patient with the onlookers. It was kind of weird but we saw close to half a dozen great danes while there. Not a dog you see all that often.
Sunday we awoke to rain and the drive home. It rained the entire way back. Better to have rained on Sunday than on any of the days we were there.  Overall it was a really fun time. The weather was nice and it wasn't too crowded. Savannah is a great town to walk through. There are tons of squares to stop in, loads of historic house museums, historic cemeteries, beautiful churches, and more. Outside of town are Fort Pulaski and Old Fort Jackson, not to mention Tybee Island. Shopping and restaurants are plentiful. Staying in the historic area is not cheap but good prices can be found with some effort. If you don't mind driving in and dealing with the parking problem hotels near I-95 are always an option. Highly recommended.
Posted by Robert at 11:48 AM

Email ThisBlogThis!Share to TwitterShare to FacebookShare to Pinterest
Labels: Georgia