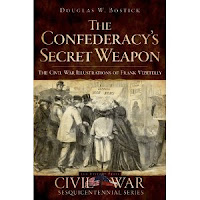 I think we sometimes forget just how advanced our world has gotten. We can hear about, see photos of, or watch live video or events happening around the world. Just turn on CNN, Fox, or fire up your computer and news of the world is yours for the asking. It wasn't so easy during the 19th century. People had to rely on newspapers which could be notoriously slow and behind. That was especially true when it came to news from overseas locations. Such was the case of the Civil War as England and France were desperate for news.

To try and satisfy the cravings of it's readers the Illustrated London News sent war correspondent Frank Vizetelly to the States to cover the war. Vizetelly began covering the war from the Union side and travelled with various regiments until being barred by Secretary of War Edwin Stanton. Beginning in July 1862 Vizetelly began travelling with various Confederate brigades and began calling the war the "War Between the States".

Vizetelly was present at many important sites and battles including Fredericksburg, Second Manassas, Charleston, Chickamauga, Belle Isle Prison, and others. For Vizetelly the problem was not having access to the war but rather getting his reports and artwork home. As the Union blockade continued to strangle the Confederacy blockade runners were the only way for Vizetelly to file his reports. While many made it through many others did not with those either being intercepted or sunk. While the Illustrated London News was able to publish 133 of his engravings many were also used in Union newspapers. This was due to art being confiscated from blockade runners or also due to copying from the ILN.

After the war Vizetelly continued his reporting and after a brief "retirement" he was drawn to the Sudan to report on the Mahdist's insurrection against Egyptian rule. It is believed Vizetelly was killed during a massacre of British soldiers at the Battle of Kashgil in November 1883.

Douglas Bostwick has written a very interesting and easily read book. Due to it's size this is a quick read and an excellent introduction to the subject. The brief bibliography will lead interested readers to other related titles. I was not familiar with Frank Vizetelly but after reading the book and seeing many examples of his art I have a true appreciation for what he was able to do. This book is part of the Civil War Sesquicentennial Series being issued by The History Press. Be sure to check their website for more titles. I personally look forward to discovering more of their work.

A special thanks to Jim Durney at the Suncoast Civil War Society who sent this book as a thank you for joining and also to The History Press for providing these books to Jim and our group.
Posted by Robert at 11:27 AM