One of my current research interests is in Confederate soldiers who are buried in Volusia County, Florida. There is nobody famous here that I have found. No Generals thought to retire to the beach at Daytona. My how times have changed. I am trying to photograph all known headstones, gather GPS coordinates, and put together some biographical information on each known Confederate. For some this will prove near impossible while others will of course have more information available. 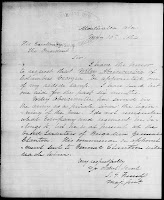 Working in alphabetical order I am starting with Wiley Abercrombie from the state of Alabama. Abercrombie served both in the 2nd Georgia Infantry and then transferred to the 7th Alabama Cavalry. After obtaining his pension application I found he served as Aide de Camp to Major General Samuel G. French. This weekend I started  retrieving his military records through Footnote and found this interesting letter written by General French to Confederate President Jefferson Davis.  I have tried to keep the original spellings. I have attached a copy of the letter. I hope you are able to save it and see the original.

His Excellency
The President

I have the honor to request that Wiley Abercrombie of Columbus Georgia be appointed one of my aids de camp. I have had but one aid for the past six months.

Wiley Abercrombie has served in the army as a private since the beginning of the war. I do not remember what company and regiment he belongs to, but he is at present at the Head Quarters of Brigadier General Clanton. His commission or appointment sent to General Clanton will reach him.