Continuing the details from our recent vacation to the Smoky Mountains. On our drive north we stopped the first night in Columbia, South Carolina. 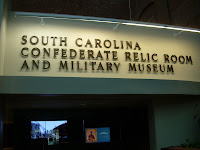 The main reason for the stop there was to see the South Carolina Confederate Relic Room and Military Museum. What a great place this is. As the third oldest museum in SC it concentrates on the history of South Carolina military troops from the Revolutionary War until today. It's strong points are Civil War artifacts and the museum has a large collection of battle flags on display. It would be easy to spend a large chunk of a day here. A surprise to us however was an exhibit titled Forgotten Stories: SC Fights the Great War. This is part of a multi museum exhibit dealing with South Carolina and World War 1. Visit the website Forward Together for more information. This alone was worth the $5 entry cost as we got to see uniforms, relics and more from the period. The layout was easy to follow and even walked you through a recreated World War I trench. We bought the combination ticket ($9) which also allowed us to visit the SC State Museum. For me this was not the greatest part of the day. A fairly straight forward museum with a science section, a natural history area and other standard fare. We were a few days too early for a new exhibit which is now open called The Coming of the Civil War. Currently there is also a "pirate" exhibit but we decided against paying an additional $5 to see it.

From there it was off to walk around the area and see the close by sites. The main site I was looking for was the Trinity Episcopal Church Cemetery where Civil War Generals Ellison Capers (who has a tie in to research I am doing on a local Confederate soldier), Wade Hampton III, and States Rights Gist are buried. After a short miscue reading the map we easily found the church and cemetery. While not large it is very full so Chris and I split up in order to find their monuments. After a few minutes we had gone through the whole cemetery and collected photos of the three generals graves along with a few other interesting finds.
﻿
﻿ ﻿ ﻿﻿
﻿﻿﻿
﻿﻿

﻿﻿
﻿﻿ From there we walked around the city some more and took in the close by sites. One I just had to have a photo of was this sign in the photo to the right. Notice the reference to Count Pulaski. Well you can't see it but I was wearing my Fort Pulaski hat. OK, I'm dumb sometimes. Towering over most of the area is the South Carolina State House. It is quite an impressive looking building and is surrounded by many sidewalks, grassy areas, and statues. It's really quite a nice area to walk around.
Every government needs money and the Confederates were no exception. Of course they printed large quantities of bills which were virtually worthless. Columbia was the home of the Confederate Printing Plant. The building was originally designed by Evans and Cogswell and employed mostly young women who signed bills by hand. The building was burned in February 1865 with only the foundation and walls remaining. Architect Frank Milburn redesigned the building as office and warehouse space in 1901 for the South Carolina Dispensary Board of Control. The state sold the building in 1913 for just over $125,000. During the Great Depression the federal government used the building for the Seed Loan Program. During World War II the building was used as a warehouse for military supplies. The building was later used by Morris Furniture Distributors before becoming vacant for many years. In 2004 the building was renovated and now houses a Publix grocery store. This historic building is located in the now fashionable Vista district. (1)
﻿﻿
﻿﻿﻿﻿
﻿﻿
Our next stop was a drive to Elmwood Cemetery. This cemetery is the final resting place of Confederate Generals Maxcy Gregg and Milledge Bonham. In addition there is a large section of Confederate burials most of whom are unknown. This is a fairly large cemetery but we were able to find both Generals without having to stop at the cemetery office for assistance.

This was a great city and I kind of wish we had had more time. If you are interested in the Civil War and visit Columbia be sure to pick up a copy of the brochure "General Sherman's March on Columbia, South Carolina-Self Guided Tour". This contains well over 2 dozen sites the majority of which are open to the public. You may also find more information here.

We then headed on toward North Carolina.

Email ThisBlogThis!Share to TwitterShare to FacebookShare to Pinterest
Labels: Traveling