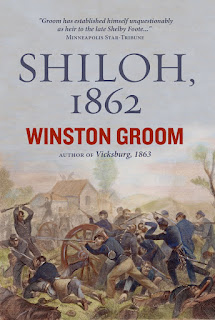 I recently received this press release from the National Geographic Society regarding the new release Shiloh, 1862 from author Winston Groom. They were kind enough to send along a review copy as well. In addition they are offering readers of my blog an opportunity to receive a free copy of the book. They are willing to provide up to three (3) readers a complimentary copy. Just be one of the first three to reply to the post. I will confirm you are a winner and ask you to email me your address (my email is under the book review policy information). I will send your mailing address along to my contact who will have a copy of the book sent to you. No obligation. If you would like to post a guest review on my blog I would love to have it.

As always thanks to my readers and thanks to Mark at EMG Promotions for making this giveaway happen!

SHILOH, 1862
The First ‘Great and Terrible’ Battle of the Civil War

WASHINGTON (Feb. X, 2012)—The Civil War saw some of the most bitter battles fought by American soldiers. According to Winston Groom, distinguished Civil War historian and author of the best-selling “Forrest Gump,” one battle set the stage for those to come. In his new book SHILOH, 1862 (National Geographic Books; ISBN 978-1-4262-0874-4; on-sale date: March 20, 2012; $30 hardcover), Groom gives a masterful account of the Battle of Shiloh, fought by 100,000 soldiers in the wilderness of southern Tennessee, which marked a violent crossroads in the Civil War.

The Battle of Shiloh began on April 6, 1862, when Confederate troops led by Albert Sidney Johnston launched a bold, surprise attack on a Union stronghold under the leadership of Gen. Ulysses S. Grant to gain control of the Mississippi River Valley. With improved weaponry, a decades-long buildup of hatred, and many untrained soldiers who had never fought in war before, the battle turned into a shocking tragedy for both sides. “It was so bloody and destructive that in many cases soldiers writing home could simply not find words to describe it,” writes Groom. In a single day, more casualties resulted in Shiloh than all previous wars combined, including the American Revolution. After two days of combat, Grant was able to bring his Union troops to a victory, but nearly 24,000 soldiers had lost their lives, and the American people knew the war they thought was ending was only beginning.
In SHILOH, 1862 Groom deftly crafts a dramatic narrative of the battle from beginning to end. Key characters are highlighted as he places their personal history in the context of the battle. Stories are woven together from a number of memoirs and diaries, including 9-year-old Elsie Duncan’s, whose home became a safe house for soldiers. Personal accounts from famed journalist Henry Morton Stanley and author Ambrose Bierce are also included, providing a thorough look at the battle through a variety of perspectives.


Groom’s ability to bring context and meaning to this important battle 150 years later is evident throughout the book. Each epic moment is thoroughly detailed, giving readers an in-depth look into two days of chaos, disorder and bloodletting. Historian Otto Eisenschiml, an early chronicler of the battle, said even though “Gettysburg was bigger; Vicksburg was more decisive, Antietam even more bloody,” Shiloh was “the most dramatic battle fought on American soil.”

“For those who endured it, Shiloh was more than a dream; it was a living nightmare that no one could forget. The sheer magnitude of the butchery staggered the imagination. In one sense, the battle had settled nothing except to keep the coffin makers busy,” writes Groom. “But the significance of Shiloh was not so much that the Rebel army failed to subdue Grant, or that Grant resisted it, than it was to impress on the nation — both nations — that there was never going to be some neat and exquisite military maneuver that would end the war — or even come close to ending the war.”

With its comprehensive maps, photographs and epic storytelling that highlights the major personalities, politics and mind-set of the day, SHILOH, 1862 is a compelling look at a battle that changed the course of the Civil War and American history.


Winston Groom is the author of 15 previous books, including “Vicksburg, 1863”; “Forrest Gump”; which is now celebrating its 25th anniversary; and (with Duncan Spencer) “Conversations with the Enemy,” a Pulitzer Prize finalist. In 2011, Groom received the Harper Lee Award for Alabama’s Distinguished Writer of the Year. A graduate of the University of Alabama, he lives in Point Clear, Ala., with his wife and daughter.

For more information on Shiloh 1862: