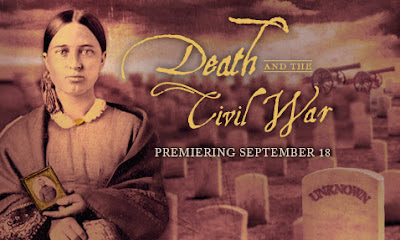 The PBS show American Experience has been broadcasting Death and the Civil War over the last week. The good people there were kind enough to send along a DVD review copy that I have been able to watch. Overall I was quite impressed.

this is a show that anybody interested in the Civil War should take the two hours needed to watch. While not breaking any new academic ground viewers can see photos of and hear the horror of the war. Despite early hopes this was not to be a quick event. With over 700,000 dead nearly every family in the country was affected.

Narration is broken up several ways. The main narrator is Oliver Platt and his voice lends a solemnity to the show befitting the subject. Letter excerpts are read by several others including Amy Madigan. Every documentary like this will have it's share of "talking heads" and this one is no exception. Dr. Faust of course plays a main role. Others, such as George Will, J. David Hacker, and Vincent Brown may or may not be known by viewers. I personally found the contribution by David Blight a highlight. I came to know of him after downloading a course of his from the Apple University site and find him to be an engaging speaker. I have not read any of his books so I can say what I feel about those however. Another surprisingly interesting speaker was Thomas Lynch. Lynch is an undertaker by trade but also an author of note. You can read an interesting, but older, interview with him here.

The video portion of the program is really quite haunting. The photos used are a nice mix of well known and those I have not seen before. The lighting of the whole program is done in such a manner as to constantly remind the viewer of the seriousness of the subject. The background music for the program should be payed attention to. It helps set the mood but at no point is it overwhelming. I was not familiar with the name Brian Keane until searching out the music credits here. He is however quite well known and has scored numerous films and documentaries and has won multiple major awards.

Overall the program is broken into six major subjects including: dying, burying, naming, believing and doubting, accounting, and remembering. A major question that is asked by the program is if it's citizens are expected to make the ultimate sacrifice (death) for the government what does the government owe to it's citizens who make this sacrifice. At the time of the war neither government was able or ready to answer this. Out of the war however came improved medical care including the formation of an ambulance service, an improved ability and desire to remove soldiers remains from the field and to identify them thus giving families closure, and with the formation of national cemeteries soldiers and their families are able to give a proper burial to their brave men (and now women).

Again, while not breaking any new ground this is a show I can highly recommend. The images and subject are likely to stick with you for quite a while after watching this. Be sure to check your local PBS station for times or watch it online at your convenience.
Posted by Robert at 3:27 PM