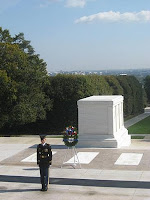 I found this news article on the Arlington National Cemetery website to be very interesting. Sure it doesn't go into a huge amount of detail but it shows the care that is put into this cemetery and particularly the Tomb of the Unknowns. the delicate repair work being done is incredible. Looks like every 20-30 years these types of repairs will need to be made. Hopefully the problem won't become worse over time. Here is the official web page for the Tomb of the Unknowns on the Arlington site.

If you haven't had the chance to go to Arlington it really is one of those places every American should have the chance to see. I was lucky enough to be able to visit a couple of years ago while on my honeymoon and I would love to go back. It can easily turn into a full day event if you aren't careful. In the mean time the book linked below is a wonderful photo book for anyone interested in the cemetery. There are several other nice books out there as well.

Posted by Robert at 2:59 PM No comments:

By stroke of luck B.P. Gallaway came to have acces to the Civil War papers of Private David C. Nance. Gallaway's daughter was in a class that was taught by the daughter of Don Morris the President of Abilene Christian University and also the grandson of Nance. Morris provided access to the papers and also helped fill in the details he could. Gallaway has left out certain religious aspects of the Nance papers at the request of the family. To me this really doesn't make any difference to the story.

Nance was born in Illinois in 1843 and the family moved to Texas in 1852. When the secession crisis broke out his mother was firmly in support while his father was no so. Despite his father's objections Nance joined the Ellis County Grays later to be known as Co. E 12th Texas Cavalry led by W. H. Parsons.

During his service Nance narrowly escaped death several times. In July 1862 at Cache River Nance was shot three times and finally taken prisoner. Despite his injuries he managed to escape and was found by Confederates who took eventually transported him to Little Rock. Nance took his injuries, but that his life was spared, to be God's anger at war and Nance vowed not to shoot at another man. After his long recovery Nance used connections to be assigned to make gunpowder. He thus returned to Waxahachie, Texas to learn the art of powder making. The dangers of the job came to reality in April 1863 as a series of explosions rattled the mill Nance was working at. Two coworkers perished due to injuries but again Nance managed to survive. He again attributes his survival to the hand of God. Later in May 1864 at Yellow Bayou Nance was again shot, this time twice, with the second nicking an artery in his neck. With the help of messmates Nance was taken to a nearby farmhouse where a surgeon  removed the minie ball and helped save his life.

Gallaway takes us on a tour of the battles fought by the 12th Texas. Throughout we see the bravery of the men and their determination. However we also see conditions getting worse for Confederates. As the Union victories keep mounting and Confederate losses continue in manpower and resources the men begin to change. Gallaway writes a long passage describing how Nance found the men changed when he returned after healing from his injuries suffered during the gunpowder explosion. "He found that they also had changed in appearance and disposition. Like their comrades in the Vienna camp, they were emaciated, dirty, and dressed in rags. And they somehow seemed more cruel, vicious, and belligerent. They were reflective, preoccupied, troubled, and silent...Since Burleson's rangers, like all Confederate troops, had to live largely off the country, their quest for food for themselves and their horses had turned decent, considerate, law-abiding farm boys into shameless, unabashed thieves." (page 73).

After the war Nance became a successful farmer for several years before going to school where he excelled in English composition and mathematics. He left college after two years to marry Sallie Hackley. Together they had four children. After a long bout with rheumatoid arthritis Nance spent nine years teaching. In 1908 Nance wrote the chief regrets of his life all of which dealt with the war. He most regretted joining the army and fighting for the right to own slaves. He also felt that war is murder and murder has no mercy. He also seriously regretted going against his fathers wishes by joining the army. Nance passed away in 1925.

This is not a book that breaks any new grounds as far as scholarship goes. There is not a huge amount of detail given to any particular aspect of the war. Rather this is the story of one soldier told mostly through his own writings. For anyone interested in the mental struggle of the common soldier this would be an interesting read. Those with an interest in Texas during the Civil War or cavalry operations in the western theater this is a book you might want to look at. Gallaway has provided a large bibliography and notes section for those looking for further resources.

Thanks to the good folks at Abilene Christian University Press for providing a copy of this book. Please note that any page references may be incorrect as my copy was a proof copy and not the final book. I have also refrained from comments on the photos because in my copy they did not reproduce well enough for judgment.
Posted by Robert at 8:35 AM No comments:

Today I received the Fall and Winter 2010 University of Nebraska Press catalog. The catalog is available on the website in PDF format. Check in the left hand column for the link. The catalog isn't overrun by Civil War titles but I did notice three paperback releases that might be of interest to readers.

In September a trade paperback of Lincoln's Generals edited by Gabor Boritt will be released. ISBN 9780803234543  $17.95   Esteemed historians take on the relationship between Abraham Lincoln and generals McClellan, Hooker, Meade, Sherman, and Grant. This looks like it will be a great book.

Also in September will be Iver Bernstein's The New York City Draft Riots. ISBN 9780803234536 $21.95  Bernstein takes on the social, cultural, and political aspects of New York City (and the country for that matter) and how these led to the violent insurrection that ended up with more than 100 dead.

November will see the paperback release of The Long Pursuit penned by Roy Morris. ISBN 9780803239289 $18.95    If you are interested in the interplay between Abraham Lincoln and Stephen A. Douglas this may be your book.

Of peripheral interest to Civil War readers will be the December release of Boots and Saddles or, Life in Dakota with General Custer written by Elizabeth Custer. ISBN 9780803234567  $17.95

UNP produces a lot of nice books and if you have an interest in Native American history you will definitely want to check out the website.
Posted by Robert at 7:26 PM No comments:

Email ThisBlogThis!Share to TwitterShare to FacebookShare to Pinterest
Labels: Books for sale, University of Nebraska Press

"Save Ellis Island" out of money

The group Save Ellis Island who partners with the National Park Service to preserve and restore buildings on Ellis Island has run out of money and could soon be closing. After reading the article linked below it seems like it's a combination of a bad economy, and also infighting between SEI, NPS, New Jersey and New York. In the past New Jersey, who won sovereignty over the island through a Supreme Court decision in 1998, has withdrawn all funding for 2011 after having funded $650,000 in prior years. New York has not contributed to the effort.

Email ThisBlogThis!Share to TwitterShare to FacebookShare to Pinterest
Labels: Off topic, preservation

The Chase is On!

Just a very brief post. With today being the anniversary of Abraham Lincoln's death I wanted to remind readers of a couple of very good books on the subject of the assassination and John Wilkes Booth. I haven't read them in a while so there will be no "review". You won't go wrong with either of these however. Both are highly recommended and I will need to put them back in my ever growing "to be read pile".

The Surratt Courier. The Surratt Society. Volume XXXV No. 4. April 2010.

This issues starts off as always with the President's Message and a listing of upcoming events.

The main article this month is titled The Old Capitol Prison by Joan L. Chaconas. The article is adapted from a speech given at the 2009 Surratt Society Conference.

Interestingly enough the building was originally built in 1815 to house Congress after the British burned the Capitol in 1814. I find this funny since many believe all in Congress should be in jail. Just my odd humor I guess. Anyway...The building then became a school and was then used as a hotel before sitting empty for a decade. The government confiscated the building in 1861 and turned it into a feared prison. Later the building was torn down to make way for the Supreme Court Building.

A wide variety of prisoners from muggers to counterfeiters to northern soldiers to "prisoners of state", both men and women, Union and Confederate, were housed here in various rooms. Most were housed on the first floor but if you were deemed a political prisoner you went to Room 16 on the second floor. Accomodations were poor with cramped quarters, vermin filled bedding, and bad food. The article also provides a listing or persons associated with the Lincoln murder conspiracy who were held there.

Overal an interesting article. A future issue is to contain an article on William Wood who was the superintendent of the Old Capitol Prison. I'm looking forward to it.
Posted by Robert at 9:57 AM No comments: