It's amazing how quickly you can fall behind on magazines if you aren't careful. I realized I have a whole pile to weed through let alone try to post about. Well I'll try to get started here by discussing a couple recent issues of Blue and Gray magazine.

The 150th issues of Blue and Gray focuses on Richmond, Kentucky and the late August 1862 battle that took place there. The feature article was written by B. Kevin Bennett. A nice article that contains many period photos, mostly of the major players, numerous detailed maps, and end notes. Bennett's sources include both primary and secondary resources. I'm a believer magazines should include notes for those who wish to do further research or want to verify what the writer has said. B&G is to be commended for this.

In addition to the article there is the normal "General's Tour" article that provides a nice driving tour to many points of interest for this battle. The article is accompanied by more maps and also contemporary photos to help you find your way. Very interesting.

Also included are the normal slate of book reviews and an article I found extremely fascinating that concerned Union Identification Discs. These are basically a precursor to government issued "dog tags". Author Joseph W. Stahl points out there are 49 known styles of tag and he proceeds to discuss the three most common. This is an interesting sideline article helping to bring a human element to the war. 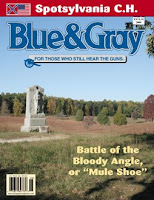 Chris Mackowski and Kristopher D. White treat us to an in depth article on this months feature which is Spotsylania Court House. The article is titled " The Battle of the Bloody Angle or 'Mule Shoe': Spotsylvania Court House May 12, 1864". I haven't finished up this article yet but have enjoyed it so far. Included are the expected maps, period photos, and a long selection of end notes. "The General's Tour" for this issue provides both driving and walking tours. Start at the Chancellorsville Battlefield Visitor Center and go from there. The tour article contains several detailed action maps and contemporary photos for armchair travellers and also to help you get oriented.

A round of book reviews are included as is a very interesting article about a city that you wouldn't normally associate with the Civil War. The article is titled "Sacramento's Civil War Legacy" and was written by Robert Bundy. Several locations are discussed including Historic City Cemetery which is home to over 250 Union soldiers, several Confederates, and a General from each side, George B. Cosby (CSA) and George Wright (USA). Another must see stop is the Stanford Mansion, where wartime governor Leland Stanford's wife and friends met to make underclothes for Union soldiers. After a recent $22 million upgrade the home is open for tours and is still used as a reception center for the California governor.

Overall I enjoyed these issues. I have a couple others but must admit to never having gotten around to reading them. I'll need to pull those out and also look at ordering back issues.