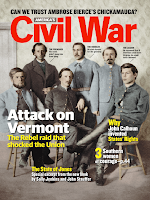 The November issue of America's Civil War has hit mailboxes recently and has several interesting articles.

The cover article, written by Ron Soodalter, is titled Fury in Vermont. In late 1864 the small town of St. Albans, VT was the scene of an attempted takeover by Confederates who had crossed the border from Canada. The rebels ended up taking off with a large sum of cash from local banks and crossed back into Canada which helped set up a difficult diplomatic issue for President Lincoln.

In A Tall Tale of Chickamauga written by Gordon Berg we find out if Ambrose Bierce was telling the full truth in his recollections dealing with the battle. Tamela Berg takes on an interesting Civil War oddity in her article Sweet Subversive Scribes where she tells the story of three Virginia women who published the pro-Union Waterford News. Check the Waterford Foundation website for further information or to purchase a copy of all eight issues. In Rebelling Against the Rebellion Sally Jenkins and John Stauffer tell the story of Newton Knight who was forced to fight for a cause he did not believe in. This is adapted from their book The State of Jones.