An interesting article was in yesterday's local newspaper. The attached photo is from this newspaper as well. 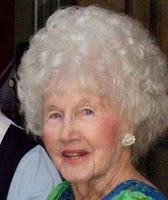 It turns out that one of the last 30 remaining daughters of a Confederate soldier lives in Flagler county just north of where I live. Sadie Strickland, 100 years old, is the daughter of William Mitchell Stone. Strickland was born on October 27, 1909 when her father was 67 years old. Unfortunately Strickland is currently in hospice care and according to her family is not expected to live through the week.

I did some very cursory research to try and find information on Ms. Strickland's father. Based upon the article I assumed the family to be from Georgia. Unfortunately the Civil War Soldiers and Sailors Database lists multiple William M. Stone's from Georgia and several William Stone's from Georgia (armed with information from other sources I did however find Pvt. Stone's record on the site). Fortunately the state of Georgia has Confederate Pension applications online and here I found much information on William Mitchell Stone. He served in the 47th Georgia Infantry Company F. He enlisted March 4, 1862 and was discharged on April 26, 1865 at Greensboro, N.C. The 47th fought with the Army of Tennessee at Chickamauga, Chattanooga, and in the Atlanta Campaign. They also participated in the defense of Savannah amongst other battles. At the time of his pension application Stone owned property worth less than $1,300 with the large percentage of this being in land. He and his wife had a combined income of less than $15 per month. Mr. Stone died due to a strangulated hernia on December 8, 1920. This memorial has been created for Mr. Stone. Mr. Stone's widow filed a Georgia Confederate pension application that may be seen here.  Another possible family clue that I did find was burial information on Unity Turner. This website shows Turner being the husband of Quip Turner and also references her being the daughter of William Mitchell Stone CSA and Margaret Spell. I would assume Margaret Spell to have been Stone's first wife especially considering the age difference between Unity Turner and Sadie Strickland.
Posted by Robert at 3:18 PM