My father's side of the family contributed several soldiers to the Confederate effort through various Florida regiments. My great great grandfather was Robert Charles Partin.

Robert Partin was born March 15, 1840 in Tattnall County, Georgia the son of Hugh Gilmore Partin and Nancy Elizabeth Smith. The family moved to Florida in 1852. Partin enrolled in the Confederate Army on September 14, 1861 at Cedar Key, Florida joining Company F of the 4th FL Infantry. He served through the war apparently never being captured and injured only slightly. After the war he married Narcissus C. Ballard on July 19, 1876. I believe them to have had three children, Nellie B., Homer M, and Charles D. .According to his death certificate Robert worked as a farmer and died on June 14, 1927 from senility. He is buried in Rosehill Cemetery in Osceola County, FL.

An interesting find about him came from his Florida Confederate Pension application. It turns out that on December 14, 1906 Florida governor Napoleon Broward appointed Partin to be "Honorary Chickamauga Park Monument Commissioner for Osceola County, to exercise, perform, and enjoy all the duties and privileges appertaining to said position." I can't say I know what this means and have not done any further research on it or on Partin's service record. I just thought it was a neat item and the type that is not in every soldiers application. You may view the document here. If any readers have knowledge on this please feel free to comment.

Most information in this post came from Robert Charles Partin's Florida Confederate Pension application which may be viewed in PDF format here. 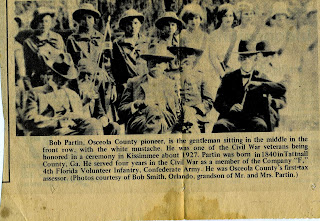 A photo I have found of Robert Partin's headstone and also a newspaper article in papers from my grandmother, Louise Redd. Unfortunately, I do not know the date or what newspaper this is from.
Posted by Robert at 8:20 PM