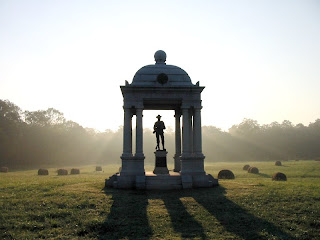 A few days ago I posted about an interesting find I had made in my great great grandfathers Florida Confederate pension application. Jim Schmidt suggested contacting Chickamauga expert Dave Powell for his input. Dave was kind enough to reply and allow me to post his thoughts. Some great information especially considering I knew next to nothing about this battle. This is an area I hope to increase my knowledge on in the future especially with the family connection there!

Since Chickamauga was the first national military park, states created commissions starting in the late 1880s to determine how to site monuments. The northern states led the way here, with the goal of having most monuments in place when the park was scheduled to open in 1896.

The idea was that each regiment would form a committee to decide where their monument belonged and what text it should include. Then the ideas would be vetted at the state level, and finally by the park commission.

The ex-confederate states, having much less money to throw at monuments during this period, were slower to respond and often created a single state monument instead of individual regimental ones. Florida was one such - their monument stands just south of the Visitor's Center today.

The 4th Florida was in Stovall's Brigade, Breckinridge's Division, and fought very near where the state monument sits today. On September 20th 1863 Stovall's men routed part of John Beatty's Federal brigade (principally the 104th Illinois and part of the 15th Kentucky) and then turned south to strike into the flank of George Thomas' line at Kelly Field. The 4th did reach Kelly Field, but then Union reserves ejected them again. The 4th suffered 87 casualties out of 238 engaged, or 37%, in about an hour's fighting.

Dave Powell
Posted by Robert at 8:47 AM