There's a new magazine on the block that looks to be raising the bar in Civil War scholarship. Welcome to The Civil War Monitor! This new quarterly magazine is the brainchild of Terry Johnson. Many may know Johnston from his stint at North & South magazine. 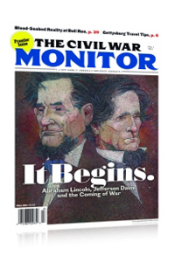 With an already crowded field a new magazine needs to be able to stand apart. The Civil War Monitor is doing just that. From the cleverly named cover article "It Begins" to the closing "Books and Authors" section this magazine has winner written all over it.

The issue starts strongly with an interesting section called Salvo: Facts, Figures, & Items of Interest. This issue contains a travel guide to Gettysburg, an interesting section from the Center for Civil War Photography titled In Focus, and a section called Primer. This issues Primer focuses on Civil War headgear. This is a great intro to learning the basics on the many types of hats worn during the war.

The lead article written by Russell McClintock is titled The Men & The Hour: Lincoln, Davis and the Struggle to Avert War. The odd pairing of the Army of Northern Virginia and a battalion of sailors is the subject of Derek Smith's Run Aground at Sailor's Creek. Sivlana R. Siddali presents us with Babylon is Fallen: The Northern Press Reports-With Shock and Awe-On Sherman's March to the Sea.

Three of the articles deal with death in one form or another and despite the depressing theme I found them to be some of the best of the issue. Captive Memories: Union Ex-Prisoners of War and the Work of Remembrance, written by Brian Matthew Jordan deals with the work done by former prisoners of war. Included is the changing attitude toward the war from the northern public as time went by. Also included is a chart on prison mortality rates during the war. The struggle of wives and loved ones to bring home the bodies of slain Confederate soldiers is the subject of Judith Giesberg's article The Work that Remains. In the "Casualties of War" department author Stephen Berry discusses Clara Harris Rathbone who sat in the Presidential Box at Ford's Theater on the night John Wilkes Booth shot and ultimately killed Abraham Lincoln. The psychological trauma inflicted on those in the box that night is summed up nicely in a line from the article: "...Booth's bullet had penetrated all their brains..."

With articles containing endnotes and excellent artwork and photos this magazine is showing great promise to be one that will lead other Civil War magazines to pick up  their game. Be sure to check out the excellent website associated with the magazine. With blogs, photo essays, and more this promises to become a "must go to" sight for those interested in the war. The magazine also has an excellent Facebook page which I recommend you check out.

Be sure to check your local newstand for the premiere issue!