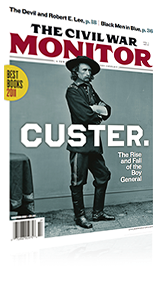 Issue number 2 of the magazine Civil War Monitor is on the stands. Like the premier issue this is well worth checking your local bookstore for! This is 72 pages of top notch history.

Civil War Monitor is setting the bar for the other magazines dealing with this subject and in some cases is already leaving some behind. With a wide range of topics, qualified authors who write in an accessible fashion, interesting columns, relevant illustrations, and endnotes this is a magazine aimed at anybody with an interest in the Civil War.

I held out from subscribing after the first issue but having seen the continuing high quality of the publication it looks like I'll be getting out my checkbook. $30 for 8 issues seems to be one of the better bargains out there. If you don't want to subscribe cover price for this issue is $5.99. Prefer to read online? Check the Monitor website and subscribe to the digital version.


Highlights this quarter include:


Custer and the End of Innocence written by Glenn LaFantasie

Black Men in Blue written by Ronald Coddington   A photo collection of African American Union soldiers including biographical essays on each.

Faded Glory written by James Marten  The struggle of old soldiers and the enduring costs of the war.

A panel discussion on the  best Civil War books of 2011 and a listing of the top selling Civil War titles of the year.

Travels--Suggestions for those visiting the Confederate capital of Richmond, VA.

Primer--A great introduction to Civil War era canteens that is loaded with photos.

Preservation--Updates on the Civil War Trust's efforts at Gaines Mill.

In Focus--The Center for Civil War Photography and an interesting find in a photo of Robert E. Lee.