During our recent vacation we had the pleasure (the cold pleasure I should say) of taking a quick visit to Mount Olivet Cemetery in beautiful Frederick, MD. Unfortunately it was during the freak late October snow and the grounds were rapidly accumulating snow and the cemetery offices were closed so we did the best we could with our limited knowledge, time, and warmth.

The cemetery was opened in 1854 and the first burial was Ann Crawford. According to it's website the cemetery now is the final resting place for more than 34,000 people with plenty more room. 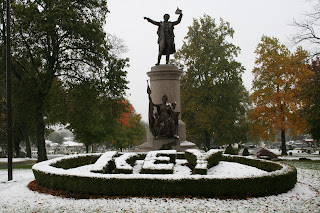 Perhaps the most famous burial in the cemetery is that of Francis Scott Key. Key lived from 1779-1843. He is most remembered for having written the lyrics to "The Star Spangled Banner". Key wrote the famous words after having witnessed the bombing of Fort McHenry during Battle of Baltimore in 1814. On his way back to Baltimore, Key penned the poem "Defence of Fort McHenry" which was published in December 1814. In 1916 by executive order Woodrow Wilson declared the song to be the national anthem. In 1931 Congress authorized the same and this was signed by Herbert Hoover. In later life Key served as an attorney and helped in the prosecution of Richard Lawrence who had attempted to kill President Andrew Jackson. Originally buried in Old Saint Paul's Cemetery. Key and his wife were moved to Mount Olivet in 1866. The large monument was placed in 1898. By Congressional resolution an American flag has flown over the Key grave since May 30, 1949. 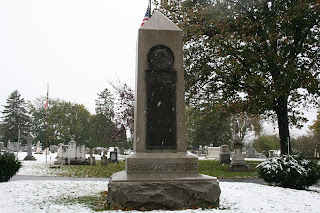 Frederick resident Barbara Fritchie has been memorialized in the poem Barbara Frietchie written by John Greenleaf Whittier. Legend has it the over 90 year old woman waved a Union flag in the face of Stonewall Jackson's troops as they marched through Frederick during the Maryland campaign. When fact confronts legend however it  turns out that Fritchie was sick on the day Jackson's troops marched through Frederick and also that they did not pass Fritchie's house. Despite this her legend lives on and the Barbara Fritchie House still stands today. 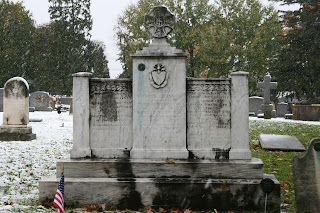 Maryland's first governor Thomas Johnson is also buried here. Johnson was a member of the Continental Congress and supported a break with England. Johnson then served as Governor from 1777-1779. Johnson held many other posts leading to a nomination for the U.S. Supreme Court. He served two years before resigning due to the rigors of the old circuit court system. Johnson passed away in 1819 and was originally buried in the All Saints Churchyard. His remains were later moved to Mount Olivet.

Be sure to check Findagrave or Interment for partial listings of those buried here.
Posted by Robert at 7:00 PM