Robert E. Lee Monument in Florida Has Been Upgraded

Again, information from a Florida Sons of Confederate Veterans group regarding some work done on a Robert E. Lee monument. 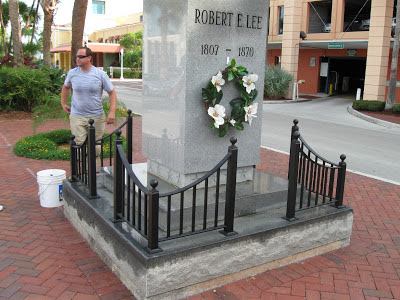 Tuesday April 30, 2013, the Robert E. Lee Monument in downtown Fort Myers, had a decorative fence installed on its base. The Major William M. Footman Camp #1950 Sons of Confederate Veterans and the United Daughters of the Confederacy Chapter #2614, both of Fort Myers, made this project a priority. The Monument had received damage to its base due to skateboarders, and they felt it necessary to take steps to do something to protect the Monument. Representatives of both organizations, Shellie Weber of the UDC & Tom Fyock of the SCV, met with the Fort Myers Public Arts Committee and proposed a plan to install a fence to protect the Monument. After submitting drawings of the proposed fence, the Public Arts Committee gave their approval and support. Barry Crumpler, of Gulf Coast Metal Works of Cape Coral, was contacted and he graciously agreed to provide the material, labor, and installation of the fence at no cost. Barry Crumpler & Nick Smith did the installation work, and the Monument now looks better than it ever has. The fence makes the Monument stand out like never before. Without their dedication and hard work, this project could not have been completed. Thank you just does not seem sufficient, for the effort and work that they put forth. I’m sure that General Lee is looking down and smiling, and very happy that the people of the County that bears his name, still care about this great gentleman and continue to honor his life.