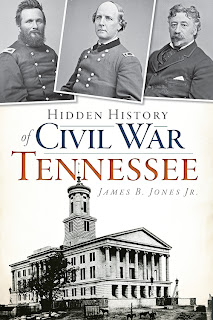 renowned figures. Beneath this well-documented history lie countless stories that have been forgotten and displaced over time. Discover how Vigilance Committees sought to govern cities such as Memphis, where law was believed to be dead. See how Nashville and Memphis became important medical centers, addressing the rapid spread of “private diseases” among soldiers, and marvel at Colonel John M. Hughes, whose men engaged in guerrilla warfare throughout the state. Join author James B. Jones Jr. on an exciting journey through the unknown and hidden history of Civil War Tennessee.

Meet the author
Wednesday, July 31 at 7 p.m. {Book Launch} @ Belmont Mansion Museum |1700 Acklen Ave, Nashville
Saturday, August 17 @ Hastings | 1660 Memorial Blvd, Murfreesboro
Saturday, August 24 at 2-4 p.m. @ Vanderbilt U. B&N Bookstore | 2501 West End Ave Nashville
Tuesday, February 4 at 2:30 p.m. @ Metropolitan Archives (First Tuesday at the Archives Meeting)
James B. Jones Jr. is a public historian on the staff of the Tennessee Historical Commission/State Historic Preservation Office in Nashville. He has published many books and articles on many topics about Tennessee history, including but not limited to the Civil War. He serves also as the editor of the THC newsletter, the Courier. He earned a doctor of arts degree in history and historic preservation from Middle Tennessee State University in 1983. He resides with his spouse in Murfreesboro.