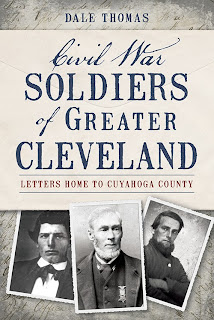 The Civil War interrupted the area around Cleveland, Ohio, in the middle of its great leap into prosperity, redirecting its men into military camps and its industrial strength into munitions and provisions. Dale Thomas roots his story in the letters that kept the ordinary soldiers from Cuyahoga County tethered to their families and friends on the home front, even as they moved from battlefield to battlefield, through sickness and captivity. For many, these letters were the only part of them to make it back—their final legacy to a community they had helped to build.
Dale Thomas graduated from Kent State University (BS in social studies and education) and Case Western Reserve University (MA in history). Before retiring, he taught social studies for thirty-one years at Bay High School in Bay Village, Ohio. In addition to serving as a judge for History Day at Case Western Reserve University, he has been an advisor for tours at the Western Reserve Historical Society and historian for the Cleveland Civil War Roundtable. Thomas is the archivist and vice-president for the Olmsted Historical Society and a member of the North Olmsted Landmarks Commission. He is the author of the books Images of America: North Olmsted and Then & Now: Olmsted. In 2012, The History Press published his third book, Lincoln’s Old Friends of Menard County, Illinois.