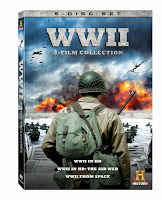 Viewers will find themselves on the front lines of key battles from the most widespread war in history when the WW II: 3-Film Collection arrives on Blu-ray Disc and DVD October 22 from Lionsgate Home Entertainment. The immersive 4-disc Blu-ray set and 5-disc DVD set offers fans the chance to own three of HISTORY’s® most celebrated and visually stunning specials for the suggested retail price of $29.99 on Blu-ray Disc and DVD $24.98, respectively.
The WW II: 3-Film Collection from HISTORY® offers viewers the chance to deconstruct the deadliest conflict in human history from three separate perspectives. The remarkable set features three critically acclaimed programs including WWII in HD, WWII in HD: The Air War and WWII from Space, offering an amazing look at one of the most talked about time periods in history from an all-new perspective. 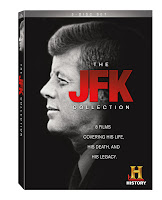 HISTORY® presents The JFK Collection, an impressive 3-disc DVD set exploring one of America’s most legendary families available on October 22 from Lionsgate Home Entertainment. Chronicling the life and legacy of our nation’s 35th President John F. Kennedy, the 8-film collection arrives just in time for the 50th anniversary of one of the most talked about moments in American history. Featuring hours of content celebrating his iconic life, The JFK Collection 3-disc DVD set will be available for the suggested retail price of $19.98.
Go inside the life of John F. Kennedy, a reckless rich kid who lived on the edge and became a WWII hero and a president who challenged the nation as it had never been before. This comprehensive family portrait also includes hour-long biographies of Jacqueline Kennedy Onassis, Joseph P. Kennedy, Robert F. Kennedy, John F. Kennedy, Jr. and Ted Kennedy.
Posted by Robert at 11:03 AM