From my good friends at Crown Publishing this is a book that looks like it would be of interested to anybody interested in World War II. If this looks of interest please be sure to check back. Crown Publishing is generously going to provide a copy for a giveaway on this blog. Please be sure to support them in return by visiting their site and seeing the other fine  books they have available.
The true story of an unlikely band of courageous men--British intelligence officers and Cretan resistance fighters--who waged an underground war against the German occupation of Crete and pulled off an improbable and remarkable mission: kidnapping the German commander of the island.


The Underground War to Rescue Crete from the Nazis

Advance Praise for The Ariadne Objective
“History both crucial and swashbuckling.” —Library Journal
“An exciting, tense narrative that unfolds like an espionage novel.” —Booklist
“An exciting, earnestly narrated World War II story.” —Kirkus Reviews
“Meticulously researched and gracefully narrated. The Ariadne Objective shows close-up the final gaudy flowering of the imperial swashbucklers—indifferent to discomfort, fluent in many languages, reckless, eccentrically decadent, mischief-makers, never unintentionally ill-mannered—who made their home in the world, before George Smiley took over his grudging service to the Empire.”
—Geoffrey Wolff, author of A Day at the Beach
“Wes Davis’ brilliant chronicle of the battle for German-occupied Crete is doubly rich in its description of character and of the perilous varieties of combat. This story tells how classically literate and well-nigh fearless Britons allied with brigandish locals to confound, confuse, and finally defeat the Nazi occupiers. It reveals how completely British improvisation and perception of local realities served to overcome a ruthless enemy.”
—Robert Stone, author of Dog Soldiers
“In the grand tradition of John le Carré, Wes Davis has created a thrilling tale of espionage in the face of great peril. This is gripping history, masterfully told.” —McKay Jenkins, author of The Last Ridge
“The Ariadne Objective is a ripping yarn, and Wes Davis is the perfect person to spin it. Ariadne will appeal to fans of Ben Macintyre books like Double Cross and Operation Mincemeat and, in fact, to anyone who enjoys a good story well told. This book kept me up well past my bedtime: I couldn’t go to sleep until I finished it.”
—Ben Yagoda, author of About Town and How to Not Write Bad 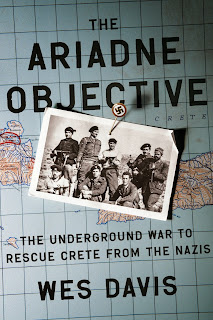 In 1991, while working on an archaeological excavation in Crete, WES DAVIS learned of a daring, little-known military operation that disrupted Hitler’s control of the island during World War II. A group of unconventional British soldiers infiltrated occupied Crete, charged with the task of sabotaging Nazi objectives in the region by joining forces with Cretan partisans. Their acts of espionage culminated in a cunning plot to abduct the island’s German commander.


After decades of research that took Davis from Crete, to the depths of London’s National Archives, where he combed through thousands of declassified documents, and to the Imperial War Museum, where he found the unpublished diary of one of the amateur spies, this incredible true story comes to life in THE ARIADNE OBJECTIVE: The Underground War to Rescue Crete from the Nazis (Crown Publishers; November 12, 2013). Davis’s brilliant debut re-creates this secret war from the perspective of the gentlemen soldiers who found themselves serving in Crete because, as one of them put it, they had made “the obsolete choice of Greek at school.” The group of unlikely heroes included Patrick Leigh Fermor, a Byronic figure and future travel-writing luminary; John Pendlebury, a swashbuckling archaeologist with a glass eye and a swordstick; Xan Fielding, the writer who would produce the English translations of books like The Bridge on the River Kwai and Planet of the Apes; and Sandy Rendel, a future Times of London reporter, who prided himself on a disguise that left him looking more ragged and fierce than the locals he fought alongside.


Anchored by a fascinating cast of characters and set in one of the war’s most exotic locales, THE ARIADNE OBJECTIVE sheds light on the pivotal mission to save Crete and block Hitler’s march to the East.


ABOUT THE AUTHOR: WES DAVIS served for two years as an assistant to the director of excavations at Kavousi in Eastern Crete, not far from the plateau where Patrick Leigh Fermor parachuted onto the island during WWII. He holds a Ph.D. in English Literature from Princeton University and is a former assistant professor of English at Yale University. Editor of the Harvard University Press Anthology of Modern Irish Poetry, he has written for the New York Times, the Wall Street Journal, and The Nation, among other publications.


Also available as an ebook
Visit www.crownpublishing.com
Posted by Robert at 4:13 PM