The History Press is pleased to introduce the new title:
The Little Rock Arsenal Crisis
On the Precipice of the American Civil War
David Sesser 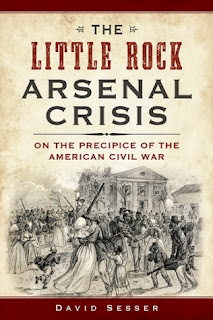 Before shots rang out on a distant South Carolina shore, talk of secession occurred throughout the antebellum United States. These talks grew to a fervent yell in Little Rock, Arkansas. On the eve of a statewide election to determine a secession convention, pro-secession militia descended on Little Rock in February 1861. They closed in around the Federally controlled arsenal in the hopes of seizing the weapons stores. A standoff began between the Federal troops and secessionists, with the citizens of Little Rock caught in the middle. The ensuing political debate set the stage for Southern secession, and the arsenal weapons became integral to the Confederate cause. Join author David Sesser in an exploration of the fascinating political drama and prelude to the bloodiest war in American history.
Meet-the-Author
November 23 from 1:00-2:30 p.m. @ WordsWorth Books & Co (5920 R St, Little Rock, AR)

David Sesser is an assistant librarian at Huie Library, Henderson State University in Arkadelphia, Arkansas. He holds graduate degrees in history, public history and library and information science. He resides in Arkadelphia with his wife.