The History Press is pleased to introduce the new title:
A Quaker Officer in the Civil War
Henry Gawthrop of the 4th Delaware
Justin Carisio 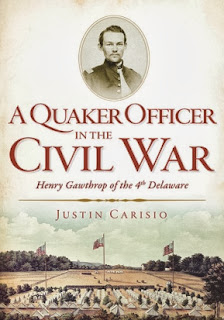 When the call went out in 1862 for volunteers for Delaware’s 4th Infantry Regiment, a number of men from Quaker families came forward to fight for the Union. Deeply patriotic and strongly opposed to slavery, they served with distinction in some of the later campaigns of the Civil War, from Cold Harbor through Appomattox. Among them was Henry Gawthrop. Commissioned a first lieutenant in Company F, he saw action during the Siege of Petersburg and at the Battle of Five Forks. Fifty years after the war, he drew on his diary and letters from the war years to create a unique memoir that is among the most comprehensive and detailed of any Delaware Civil War veteran. This is his story.

Justin Carisio, of Wilmington, Delaware, is the company historian at DuPont, where he has worked as an executive speech writer for more than 30 years. He is a volunteer at Antietam National Battlefield and holds degrees from La Salle University and the Johns Hopkins University.