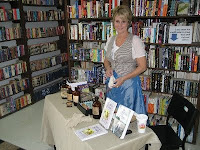 I received some information from author Nancy B. Brewer today and thought I would pass it along. Ms. Brewer is the author of Carolina Rain

and the recently released Beyond Sandy Ridge

As she says about her work "I must say my writing has opened the eyes of Yankees and Southerners alike. Many of whom would have never read a history book about the so called, "Civil War". Yet, they were happy to read a romance/historical fiction novel. My books are well researched and they do not bash the North."
From her website:

A fiction novel based on history. The story takes place in the 1860's with The War Between The States in the background, but the real story revolves around the life of Thedosia Elizabeth Sanders.

Listen as she tells you about her life, the joys, the sadness and the unbearable.
Step back in time and find out the details and the secrets of daily living in the 1860's.
Beyond Sandy Ridge

As The War Between the States closes in, Lizzie flees her home leaving behind her hopes and dreams. She finds a new home, where finery and social graces will buy nothing, not even friends. To the people of Stanly, County North Carolina, Lizzie is a familiar story. She is just another young widow with a babe in her arms. Her secret past will forever be buried deep in the sandy soil of Charleston.

"Beyond Sandy Ridge," is one woman's journey of survival, a collection of her most intimate desires and her passion for a man named Joel. Many of those she loved are forever silent. It was for their sake, she found the courage to tell her story.

Also on her website you may order books, listen to audio previews, and watch Ms. Brewer's YouTube videos or get a nice blackberry cobbler recipe. While I haven't read either of her books Ms. Brewer looks to be the type author who would appeal to those who read historical fiction/romance.
Posted by Robert at 5:18 PM

Email ThisBlogThis!Share to TwitterShare to FacebookShare to Pinterest
Labels: Fiction