Not brand new news but worth reporting anyhow. 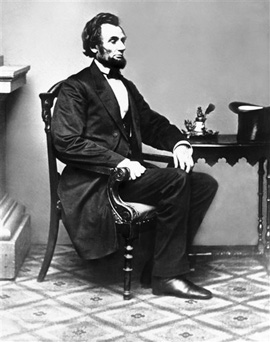 Listen up, interns tasked with endless hours of filing. Museum intern David Spriegel was organizing a stack of documents last month at the Abraham Lincoln Presidential Library and Museum in Springfield, Ill. when he made a shocking discovery.

Spriegel, a college student who had just begun his summer internship, noticed an inscription that read: "The above memorandum is in the inscription of Abraham Lincoln."

Spriegel had just discovered two previously unknown documents that Lincoln wrote in 1844 while the future president was working as a lawyer in Springfield.

"To tell you the truth, I doubted that these documents could really be authentic," Spriegel told the Lake County News-Sun Wednesday, after word had gotten out about his finding. "I figured a discovery like this would have been made by somebody else over the years. I didn't think somebody in their first week on the job would find this."
Experts with the library's Papers of Abraham Lincoln project have since confirmed the authenticity of the documents, as has a curator with the Lincoln Collection, the newspaper reports. The papers are now catalogued with 5,600 additional Lincoln legal cases; the library will make them available for viewing this fall.

"It really doesn't happen very often," Glenna Schroeder-Lein, a manuscripts librarian and Spriegel's supervisor told the paper as she described her intern's discovery. "I've found some letters to Lincoln, but I've never found letters by Lincoln."

(Photo of Lincoln in Mathew Brady's studio in Washington, under the supervision of George A. Story, Curator Emeritus of the Metropolitan Museum, 1861, via AP)
Posted by Robert at 8:11 AM