Contents of this issue include: 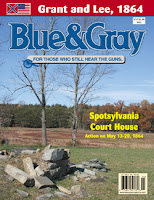 The Battle of Spotsylvania Court House May 13-20, 1864. Written by Chris Mackowski and Kristopher D. White. This article concludes a four part series begun in 2001 with Greg Mertz's feature on Upton's Attack at Spotsylvania. The second piece is from 2004 and was also written by Mertz. This covered the march of Grant and Lee's armies from the Wilderness battlefield to Spotsylvania May 7-8, 1864. Part three from 2009 was written by Mackowski and White and covers the fighting that took place at the Bloody Angle on May 12, 1864. Loaded with maps and photos this is a must have for students of the battle. A nice secondary article is included in this issue that discusses a local newspapers reporting of the 1st Maine Heavy Artillery and their participation at the Battle of Harris Farm. The 1st Maine suffered a 67% casualty rate during this battle.

Also included is the regular feature of Wiley Sword's War Letter Series. The letter this month details fighting at Columbia, TN on November 24, 1864 from a civilian point of view.

Fort Abercrombie is the subject of "On the Back Roads" this issue. Known as the "Gateway to the Dakotas" Fort Abercrombie was the first military fort established in North Dakota. This was mostly used during battles with Indians. Be sure to check out their nice website.

A nice selection of book reviews is included.

The issue wraps up with the always helpful General's Tour driving tour. Fifteen stops, beginning at the Spotsylvania Battlefield Exhibit Shelter, are discussed in depth and shown in modern photos. Excellent maps and GPS coordinates are included.

This magazine consistently puts out a quality product and should be purchased or subscribed to by any student of the war.
Posted by Robert at 1:12 PM