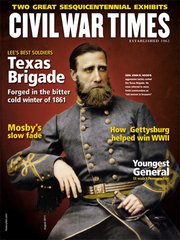 The August 2011 Civil War Times is now available and has some excellent content.
The letters column is heavily slanted toward the June 2011 article dealing with the best and worst Gettysburg monuments.

The Civil War Today column has several interesting items including the release of the first Sesquicentennial stamps being released by the USPS.  Try to guess who the most searched for Civil War General is at the National Archives. Did you guess George Armstrong Custer? If so you are correct. The Virginia Historical Society will soon be releasing a database of Virginia Slave Names. They hope to have the site open in September. Check here for more information. The books and personal papers of Shelby Foote have found a permanent home at Rhodes College. A smartphone app is available for visitors to Fredericksburg. Those of us with droids are out of luck. iPhone only.
Gary Gallagher writes "Did the Fall of Vicksburg Really Matter?"  I haven't read the whole article but it appears Gallagher puts forth that while important it wasn't the end all many attribute to it.

Prominent blogger Harry Smeltzer's Collateral Damage column discusses "Wilderness Woes for the Widows Permelia". Editor Dana Shoaf conducts an interview with Sam Waterson, most famous for his role in Law and Order, but who also portrayed Abraham Lincoln in Gore Vidal's Lincoln. A tour of Civil War sites in Frederick, Maryland is this month's Field Guide location. Dana Shoaf editorializes that the 150th anniversary of the Civil War should not be called a celebration.
Susannah Ural and Rick Eiserman write the lead article this issue: "The Winter that Made the Texas Brigade". If the Texas Infantry interests you this article on John Bell Hood and the winter of 1861 is for you. In "Yankee Super Gun" Craig Swain questions whether the 4.5 inch siege rifles of the 1st Connecticut Heavy Artillery could have prevented Pickett's Charge at the Battle of Gettysburg. Historian William Marvel brings new evidence to the question of who was the Civil War's youngest general. Jennifer Murray reminds us that Gettysburg, PA was not only vital to the Civil War but also played a key role for the United States in World War II. John Singleton Mosby's post Civil War life is the subject of an article by Douglas Gibboney.

Reviews are abundant with Harold Holzer kicking it off with his take on The Conspirator. New books by Jeffry Wert, Gary Gallagher, John David Hoptak, Donald A. Clark, and Michael Ballard are reviewed. See my review of Hoptak's book here. Susannah Ural's Ural on URLs discusses the NPS website for First Manassas. Museum exhibit reviews on Divided Voices: Maryland in the Civil War and When Duty Whispers: Concord and the Civil War wrap up this issue.
Well done and a subscription is