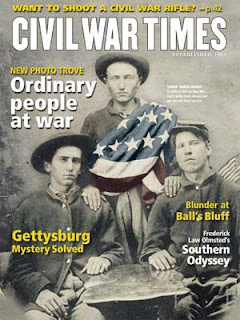 I received the October issue of Civil War Times in the mail this week. Here's a brief rundown of the contents.

In the Civil War Today column there's an article on Sherwood Forest, an 1810 home and 880 acre grounds near the Rappahannock River that was used by Union forces. The house is currently in a state of "tragic disrepair" and the property has been zoned for residential lots. Also included is an article about the hunt for a permanent home for Jefferson Davis's funeral carriage.

Michael Williams article "Bullets vs. Bricks in Baltimore" discusses a clash between civilians and Union troops on their way to Washington. Williams book City Under the Guns which tells the story of the military occupation of Baltimore will be released soon.

Tom Huntington tells the story of the North-South Skirmish Association in "Commence Firing".

"Faces of an Era" lets the Liljenquist family show some of their favorite photos from the recently donated collection.

An excerpt from Justin Martin's book Genius of Place: The Life of Frederick Law Olmsted is titled "Land of Contradiction". While mostly known for his landscape architecture in 1852 Olmsted was hired by the New York Daily Times to write on slavery and the South.

D. Scott Hartwig has found the original shooting location of photos taken by Alexander Gardner and Timothy O'Sullivan at Gettysburg.

The Union disaster at Ball's Bluff is the subject of William Marvel's "End of the Gentleman's War".

A collection of book reviews and Susannah Ural's "Ural on URLs" column wrap up the issue.