On the morning of June 4 I had the honor to attend a grave marker dedication at Seville Cemetery sponsored by the Sons of Confederate Veterans. The St. Johns Rangers Camp 1360 helped put on a nice presentation on what was becoming a quite warm morning. Being honored with a Veteran's Administration marker was 5th Sgt. James Gideon Poppell of Co. I 25th Georgia Volunteer Infantry. In attendance were descendants Margaret Wiltse Poppell, Beverly Margo Poppell, and Susan Poppell, along with family friend Andrea Lee Wade.

Sgt. Poppell's wife, Nancy, filed for a Confederate Widow's Pension in the state of Florida. The information provided by this file shows some contradictions. According to the paperwork she submitted Poppell enlisted on August 1, 1861. She claims he was captured and was a prisoner of war at the conclusion of the war. The record provided by the War Department however shows differently. After enlisting, he was captured in November 1863. In October 1864 Poppell enlisted in Co. E 3rd US Volunteer Infantry and was assigned to frontier service. Based upon this information Mrs. Poppell's pension request was denied. 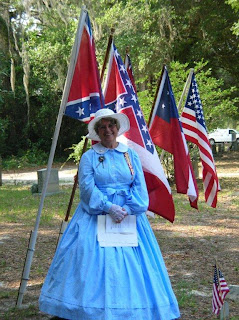 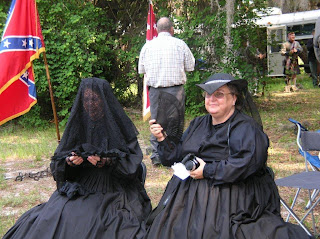 *Photos, except for event program, are courtesy of Judy Delk and Byron Peavy.
Posted by Robert at 4:14 PM